Get access to our private members only area and the strength runner community. Receive daily exercise and nutrition planning with advice, tips and much more!

Strength Runner workout clothing and supplements for before, during and after your workouts. 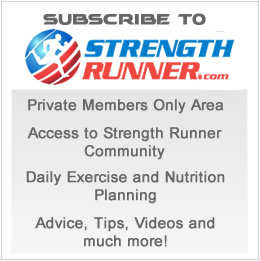 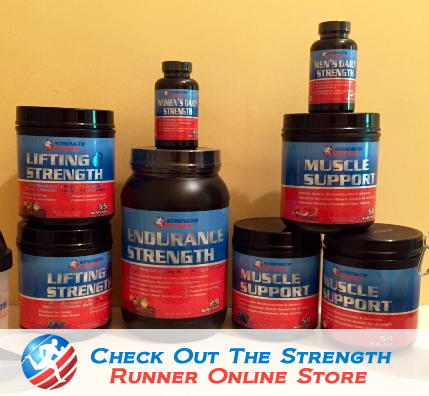 At Strength Runner our goal is to bring together two worlds that previously didn't merge as one (Strength & Running) and provide our readers, customers, & clients the tools they need to advance their training, nutrition, and rest/recovery plans!

Here you will find 1) free articles & info on our Blog discussing Training, Nutrition, Rest/Recovery, 2) visit our Store for our sports supplement line, 3) become a Member and get Daily workouts, Nutrition plans for weight loss, weight maintenance, or weight gain, 4) you can become an online client with our Online One On One Personal Training plans, 5) learn about our Sponsored athletes representing Team Strength Runner and much more!

As athletes we all understand the need to push ourselves physically to continue to see improvements in our fitness.  Our muscles and bodies learn efficiency of motion over time, and as a result if we perform the same workout that originally resulted in gains (whether that means muscle mass, speed, etc…), we will actually see performance decline as the body learns efficient movements to complete the desired task and relies less on pure muscle strength.

So we push ourselves, and we break through barriers, sometimes painfully, to continue to reach new levels.  The post-workout inflammation and soreness is something we are accustomed to and even appreciate as a sign of progress.  But at what point are we doing more harm than good, how can you recognize when you have gone too far and sidelined yourself by overtraining, or worse developed chronic muscle pain and damage?

Inflammation at the site of a particular muscle exertion is a result of tissue damage.  It's well-understood that muscles grow by tearing small fibers and re-growing them stronger, and inflammation is part of the process of clearing broken down cellular material and repairing the muscles.  Blood flows to the area initially, which you can recognize through feelings of swelling, stiffness, or heat.

Neutrophils are the white blood cells responsible for clearing the cellular debris while macrophages initiate the re-growth of healthy tissue.  For standard workouts, this process takes up to 48 hours to complete and is why many athletes choose to alternate muscle groups day to day to allow time for the full cycle.  It has been discovered that the neutrophils become more effective after the first cycle of inflammation, which is partly why soreness in a given area will decline the more you work out that muscle group.

Everyone knows the feeling of soreness a day or two after an especially tough workout, which is aptly named "Delayed-Onset Muscle Soreness" or DOMS.  It is particularly problematic to athletes as it can lead to higher rates of injury as your body adjusts the way it moves in order to fight through the soreness, putting strain on ligaments, tendons, and joints.  Even if you avoid an injury, training through an incomplete Inflammation cycle, before the macrophages have completed tissue re-generation, can compromise the muscle growth by re-damaging tissue and muscle fibers before they have healed properly.

There is a repetition phenomenon in which your body will always produce enough neutrophils to offset tissue damage as was needed in your last workout.  Drastically spiking the intensity of your workouts is what leaves your body lacking in neutrophils and elongates the process, which either forces you to take multiple days off, or if you "power through" you run the risk of joint injury from unfamiliar motions or chronic tissue damage before the macrophages have time to repair muscle tissue.  It runs counter to a lot of our intensity and motivation, but if you are dealing with prolonged inflammation and soreness you should focus on modest increases in your workouts rather than going "all in" at once.